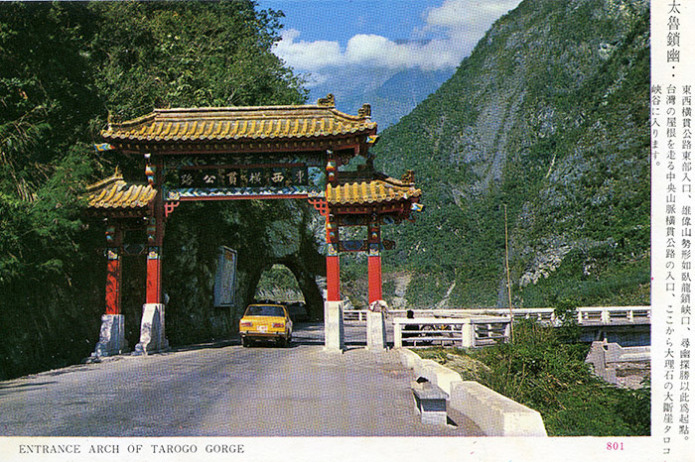 “Beware of Killer Bees and Poisonous Snakes! Exercise caution!!! Wild Animals!!” The dramatically punctuated sign at the entrance to Taroko National Park came as rather a shock. In three days’ travelling around the sub-tropical-to-tropical island of Taiwan, the welcomes had ranged from enthusiastic (a beaming double-thumbs-up from a tofu seller in Taichung market) to euphoric (a roof-raising “Hallooo” chorused by an entire bar in the capital Taipei). This was decidedly sterner.

The scenery intimidated too. A steel-grey river pounded scarred marble cliffs that towered nearly 1,000ft high. Crammed into the rock, a Buddhist shrine teetered over a scree-scattered waterfall. Just an hour’s flight south from the capital Taipei’s skyscrapers and tumbling between mountains and Pacific coast, this is Taroko Gorge – where city slickers go to get in touch with their inner dragon.

They are following in some fancy footsteps. Kung fu film directors have made the gorge a favourite movie location. Even Bruce Lee once high-kicked his way across its red-painted bridges. And appropriately for the country whose obsession with martial arts earned it a longer, extra-violent version of Kill Bill, Tarantino-esque attractions had been on offer on the road from the airport. Slinky ‘betal nut girls’ in silver bikinis and white stack-heeled boots lolled in glass booths, selling bars of blood-red nuts that have truck drivers hooked on their buzzy high.

Natural highs, though – mountain-climbing, skiing and hiking – are what the gorge is all about. At the centre of the action is the Grand Formosa Hotel, a five star whose calm, cream bedrooms have bathtubs with views of a dreamy cloud-level monastery.

Aboriginal hunting routes through the park are now trekking trails. The Taiwanese’s favourite is the riverside Mysterious Trail where they walk barefoot on wet pebbles – literally giant marbles – for a free acupressure session.

I latch on to a group taking the Paiyang Pup trail: a gentle two-hour walk at dawn through a series of marble tunnels. With just a hint of humidity rising up the misty mountainside the walk is easy and exhilarating. Lining the path are paper mungberry trees with salty leaves that children love to lick and branches that dangle deserted swallows’ nests over a vertiginous drop.

This would have been the perfect time for a glimpse of the snow leopard spotted last summer. But instead butterflies – frilled like black irises – drift around our heads.

Theresa, our rather prosaic guide, seems keen to squash any romantic notions about Taroko. Pointing out a shrine to the 450 workers who died constructing its riverside highway, she tells us: “This building has good feng shui.” There is a short pause. “Although for the Taiwanese honeymoon couple killed in rockfall here not such good feng shui.” Then she shrugs and walks on.

And at the Shuilientung Water Curtain Waterfall she leads us determinedly through a pitch-black tunnel filled with a roaring river to receive a deluge of water on our heads.

Much more relaxing is Wenshan Hot Springs, which is reached via a wobbly suspension bridge and flows though an open marble cave. A group of pools range wildly in temperature. The Brits sink into the first – bath-temperature, sulphurous and soothing. The Taiwanese mostly choose the second, which a swift dip of the finger confirms is hot enough to boil an egg. Meanwhile a couple of fiftysomething gentlemen sit happily on the pebbled bed of the torrential Liwu River, inner dragons roaring quietly.